Back In Action: Super DIRTcar Series Gearing Up For June 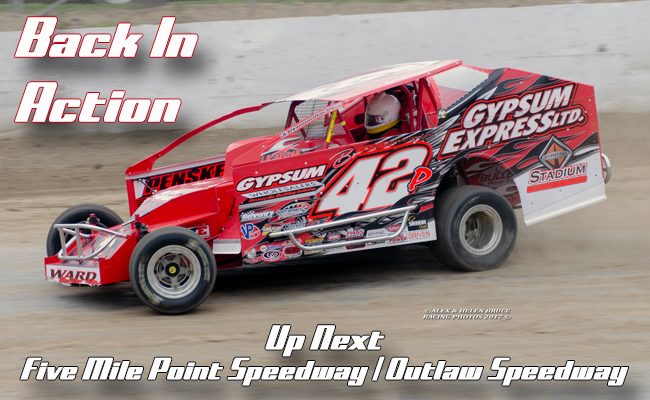 Back In Action: Super DIRTcar Series Gearing Up For June

Five Mile Point and Outlaw Up Next

June 2, 2017 – The Super DIRTcar Series is set to resume action in New York over the next two weeks with stops at Five Mile Point Speedway in Kirkwood, NY on Sunday, June 11 before invading Outlaw Speedway in Dundee, NY on Tuesday, June 20.

The Series will visit Five Mile Point for the third straight season and for the 24th time in its history for the Modified 67. Current Series point leader Matt Sheppard won last year’s date at the tight quarter-mile while Stewart Friesen was the 2015 victor. However, Genoa, NY native Pat Ward is often a focal point when the Super DIRTcar Series stops at Kirkwood.

“I’ve raced there for years and when I was younger I raced there on Saturdays (for one season in the 1980s),” Ward said.

Returning to a track he knows well is something Ward looks forward to each season. The track’s tight confines and slick surface make it a driver’s track that benefits the seasoned veteran.

“I have a good idea of what I want to do before I even go there,” Ward said. “I look forward to it, but I have to believe that for a bunch of the series guys it’s a challenge, like going to Bridgeport was for me. It’s definitely somewhere you need to race and gain experience.”

Ward led early on in last year’s race at Five Mile before eventually earning a 16th-place finish. Through two races, Ward currently sits 11th in the Series’ championship standings. He hopes his previous experience at the track will lead to his first top-five finish of the season with the Series.

“You have to be really patient and keep working your car in a straight line as much as you can,” Ward said. “It’s tight racing, door-to-door all the time. You can overdrive early and then fade really bad by the end of the race.”

If Ward can generate momentum with a strong run at Five Mile, it will certainly benefit him the following week when the Series hits Outlaw Speedway for the Ultimate Outlaw 100. At the Dundee, NY track, Sheppard will be the marked man to beat.

Sheppard not only leads Series points, but is also the current point leader in weekly competition at Outlaw. While he will be in his familiar No.9s at Outlaw instead of the No.92 he runs weekly, Sheppard’s knowledge of the track’s quirks will be an asset, he said.

“(Turns) one and two definitely have a bit of different shape to them,” Sheppard said of Outlaw. “You have to be able to get off turn two good, but the backstretch wall can sneak up on you in a hurry. Knowing the general shape of the track will definitely help the (weekly) regulars a little bit.”

Sheppard very quietly took the point lead following the Series’ last race at Bridgeport Speedway on May 16 with his second top-five finish in as many races, the only driver to accomplish the feat so far this season.

“We overcame a lot of adversity and were able to come home with a top-five,” said Sheppard, the reigning Series champion. “Sometimes runs like that are more important to championships than some of the races you win. When you can turn the bad races into good races that’s how you get your championship hopes headed in the right direction.”

Wins, however, go a long way as well, but Sheppard doesn’t feel there is any added pressure to win at one of his weekly home tracks when the Series visits.

“We want to win everywhere we go,” said Sheppard, a Waterloo, NY native. “I would say it’s an equal amount of pressure. Obviously it would be nice to win that close to home and it would be nice to get the first tour win of the season. We’re excited and looking forward to the race.”

General admission tickets are available at the track on race day for both the Modified 67 at Five Mile Point Speedway and Ultimate Outlaw 100 at Outlaw Speedway. For additional event information, visit www.5milepointspeedway.com or www.outlawspeedwayllc.com