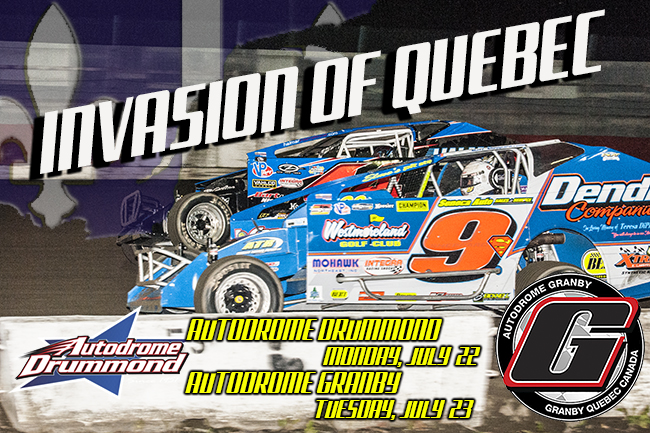 Last year the eight-time and defending Champion Super Matt Sheppard took the win at Autodrome Drummond, solidifying his run to an eighth championship. This year, the competition is pushing Sheppard like never before, especially Mat Williamson in the Buzz Chew No. 88, who is looking to pick up his first Series win after he’s been knocking on the door all season long. Can Williamson carry his success in the DIRTcar 358 Modified Series into his Super DIRTcar Series efforts? He’ll find out on Monday night.

A break in his NASCAR Truck Series schedule means Stewart Friesen is once again making the trip to Quebec in his Halmar Racing No. 44. He took top honors at Autodrome Granby last year and grabbed second place at Drummond. He’ll need to be on top of his game as Erick Rudolph, Larry Wight, Jimmy Phelps and many more need wins to take a chunk out of Sheppard’s points lead.

Phelps took second at Autodrome Granby in 2018, and the Baldwinsville Bandit sits in fourth position due to his consistent finishes all year long. The No.98H needs to string some podiums together to break into the top three in points.

Lightning Larry Wight, in the crimson Gypsum Racing No. 99L, is second in points. Wight has one points-paying win at Plattsburgh Airborne Speedway where he walked away with $10,000 and a guaranteed start in the Billy Whittaker Cars 200 in October’s NAPA Super DIRT Week XLVIII at Oswego Speedway.

The Rookie of the Year race is an absolute dogfight as southern star Ryan Godown is fending off challenges from The Greek Streak Demetrios Drellos and fire-topped Jack Lehner. All three will be taking on the Quebec tracks for the first time in their careers.

Billy Decker, Matt Mahaney, Danny Johnson and Peter Britten are always contenders, as well. They all sit in the top 10 in points.

The Super DIRTcar Series has a long history of racing in Quebec with jaw-dropping events. The proof is in the grandstands as fans pack each track every time the Gros Blocs are in town.

While fans can listen to the action from Drummondville on DIRTVision.com, they will be able to watch the 100-lapper at Autodrome Granby on FloRacing.com. FloRacing is the exclusive live HD streaming partner of the Super DIRTcar Series.