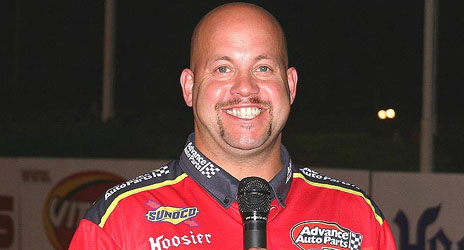 Nationally recognized SPEED commentator and popular track public address announcer Shane Andrews will take to the road in 2008 as the official voice of the Advance Auto Parts Super DIRTcar Series for a third consecutive year.

“Being able to follow a tour like the Advance Auto Parts Series is pretty much a dream deal for me,” said Andrews, 36, who will provide more than a decade of experience to each DIRT Radio broadcast. “The people I travel and work with make every show a truly enjoyable experience. Its always a treat to work with different announcers at the host tracks yet my favorite part is still crossing paths with new race fans wherever I go. I remember one guy I met last season from Arkansas even kept me entertained doing a pig call when I offered him the mike.”

With microphone back in hand, Andrews helps kick off DIRTcar’s 33rd straight season on Wednesday, February 13 during opening night of the 37th annual Alltel DIRTcar Nationals for Big-Block Modifieds at Volusia Speedway Park. Round one of the four-race non-point Advance Auto Parts Series for the mighty ground-pounders from the Northeast features a 30-lap main event paying $2,000-to-win.

A SUNY Cobleskill (N.Y.) graduate holding a BA in Agricultural Business and currently residing in Oneida, N.Y., Andrews’ career in motorsports blossomed as a reporter for the organization’s “This Week on DIRT” television program. He continued to gain notoriety as a commentator for “Rush Hour on DIRT,” a LIVE television series highlighted by both Big-Block Modified and 358-Modified races aired on the Empire Sports Network and SPEED.

Andrews has also supplied voice over play-by-play of weekly racing action while sharing P.A. announcing chores at nearly 20 speedways throughout the Northeast. Recent assignments have been as a color analyst for a dozen televised World of Outlaws Late Model Series events staged across the United States and carried by SPEED, as well as the ‘World Finals’ staged last November at The Dirt Track @ Lowe’s Motor Speedway.

“I’ve been looking forward to the trip back to Volusia for awhile now,” added Andrews, who will anchor weekly short-track shows in the P.A. booths high above Cayuga County Fair (Sun.) and Brewerton (Fri.) speedways. He also mans the microphone for nearly every special event staged at Rolling Wheels Raceway Park in Elbridge, N.Y. “In Florida the most talented Modified, Sprint Car and Late Model teams in the United States all converge at one track at one time and I get to see and talk to the best of the best for two straight weeks. Most people just read about them but I’m right there at the track, in the pits, witnessing first hand how they get the job done night after night. Its quite a privilege.”

To tune into the DIRT Radio Network, visit www.dirtvision.com. Those gaining access will need Windows Media Player 9 or higher to listen. While all users must register, there is no registration fee. Simply click sign up for free to get your own membership. For additional help, e-mail customerservice@dirtvision.com.

The Dirt Radio Network is presented by BUTLERbuilt professional seat systems. BUTLERbuilt is the leader in custom seating. Call 704/784-1027 and let BUTLERbuilt build you an advantage!!!

For the most updated news, race reports and point standings, plus a complete schedule of the 2008 Advance Auto Parts Super DIRTcar Series, please log into www.superdirtcarseries.com throughout the season.