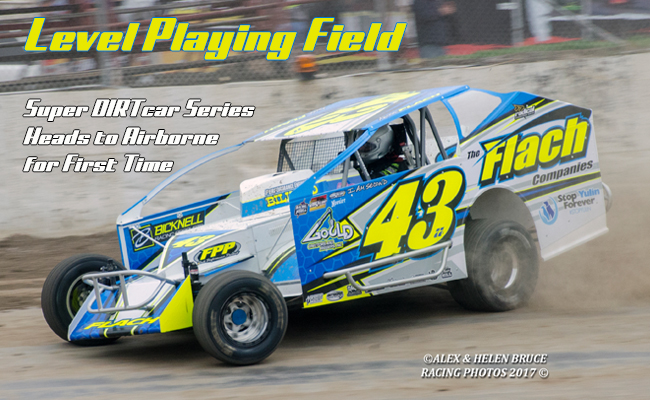 CONCORD, N.C. – June 28, 2017 – When the Super DIRTcar Series rolls into Airborne Park Speedway on Thursday, July 6 it will be the first time every full-time driver sees the track’s new dirt configuration. The Plattsburgh, NY track converted its surface from asphalt to dirt following the 2016 racing season and is now set to host the Super DIRTcar Series for the first time in its history.

Super DIRTcar Series director Mike Perrotte has been competing at Airborne weekly in the track’s 358 Modified division this season. Fans can expect plenty of side-by-side racing around the 3/8-mile oval, Perrotte said.

“It’s wide and fast with a very good surface,” Perrotte explained. “It’s a really racey place, so it’s going to be a great show. Expect side-by-side racing and a great race from start to finish. I’m looking forward to going there and putting a show on. I know the fans are really excited about it too.”

The track was scheduled to host the Series on asphalt for a special event in 2009, but the event was rained out. Now the Series’ full-time drivers face a tall task with a brand new track in front of them to tackle. For many drivers, their extensive dirt track experience means seeing a track for the first time may not have happened in several years.

“It’s always exciting to go to a new racetrack,” said Peter Britten, a Brisbane, Queensland, Australia native and full-time Series drivers. “I’ve heard a lot of good things about Airborne too. I’ve seen a little bit of video here and there, but it looks like a really nice facility. It’s always exciting when you gain another racetrack.”

Perhaps the only exception is Keith Flach. The Ravena, NY pilot has raced his Modified at Airborne before, but on the track’s asphalt surface. However, much of his asphalt experience at Airborne doesn’t translate the new dirt surface, Flach said.

In addition to its new surface, the track has a unique configuration that makes it different than nearly every track the Series will visit in 2017.

“The backstretch runs uphill and the frontstretch runs downhill,” Perrotte said. “Turns one and two and turns three and four are shaped a little differently, so it’s a driver’s racetrack for sure.”

The level playing field Airborne offers, unlike most tracks on the tour where Series veterans and even rookies often have plenty of track time in the bank, is an exciting situation for fans and drivers alike. The clean slate means there are no favorites entering the race and fans will be able to see which drivers can navigate their way around the track.

“A lot of the time when you go to a new racetrack, you might be a little tentative,” Britten said. “You know how hard you can drive it in to turn one at Brewerton, but when you go to Airborne and you’ve never been there, you’re not going to go in full throttle the first time. At the same time, you don’t get much time to get on the pace either. That’s the biggest thing – figuring out the line quick enough and making sure your car is somewhat in the ball park.”

The biggest advantage drivers have today over previous generations of racers when making their first visit to a new facility is the ability to watch video. Each driver may look for something different, but they’re all ultimately trying to learn the same information.

“I typically try to see if anybody has some in-car (camera) and try to pick up on what they’re doing if they are a decent runner,” Flach said. “I try to see where they’re getting on the throttle, off the throttle, how it looks like their car is getting through the corner. It’s hard to tell just from a regular race recap, other than how the cars look like they’re handling – whether they’re rolling over a lot or not. Other than that, there’s not really much you can do with it being a place that’s relatively new. We’re just going to try to guess and take our best stab at it.”

Reserved seating is available for the Super DIRTcar Series debut at Airborne Park Speedway on July 6. The top two rows of seats are reserved and are available for purchase through the track office by calling 518-561-3208. For additional event information, visit www.airborneparkspeedway.com.