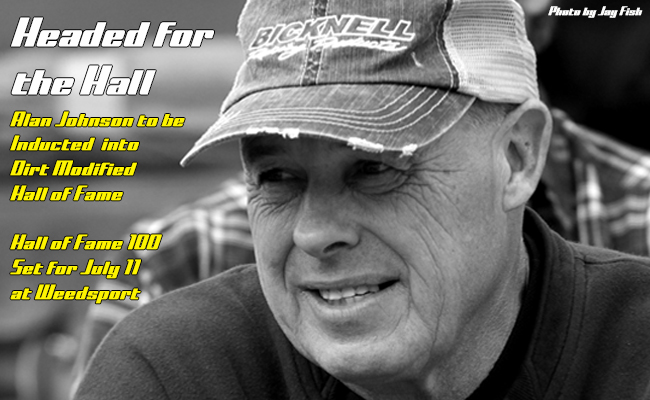 Alan Johnson to be Honored With Hall of Fame Induction

Alan Johnson to be Honored With Hall of Fame Induction

July 4, 2017 – Next week, Alan Johnson will get well-deserved recognition when he is inducted into the Dirt Modified Hall of Fame in Weedsport, NY on Monday, July 10. However, it isn’t the only time fans will see Johnson at Weedsport. He’ll be in in action the next night on July 11, behind the wheel of his Friendly’s Ford No.14J for the Super DIRTcar Series Hall of Fame 100 at Weedsport Speedway.

The Dirt Modified Hall of Fame has a rule that allows active drivers over the age of 55 years old who have had an illustrious career to be inducted before they retire. Johnson certainly fits that bill. The Rochester, NY driver is fourth on the all-time wins list with 57 and is a five-time Series champion, winning the title most recently in 2006.

“I was kind of surprised because I always thought it was for retired drivers,” Johnson said of his reaction to his induction news. “I’m really honored. It’s a pretty elite group.”

Johnson enters the Hall of Fame as part of a 2017 class of inductees that includes Steve Paine, who is also still active, and the late Freddy Adam. Several other special award winners will enter the Hall of Fame this year as well, including Gaston Salvas for Outstanding Service, Vicki Emig as Woman in Racing, Richie Tobias as a Mechanic, Randy Ross as Car Owner, and Lenny Sammons as the Andy Fusco Media Award winner.

“It’s special,” Johnson continued. “When you start out racing, it’s not a goal you aim for or expect to achieve. I’m proud of the teams I’ve been with and the cars I’ve been with that enable us to get there. I hope to see a lot of smiles that day and have a lot of fun.”

Perhaps the most impressive achievement in Johnson’s career is his consistency as much as his longevity. The 59-year-old has won a Big-Block Modified Feature in a remarkable 43 consecutive seasons. He earned a win in weekly competition in April at Outlaw Speedway to make sure the streak would extend another year.

Johnson doesn’t place any of his laundry list of accomplishments on a pedestal above others. However, he does cherish his three wins at the Syracuse Moody Mile during NAPA Auto Parts Super DIRT Week.

“It’s hard to pick out any of my fondest moments,” Johnson said. “I suppose winning the big races at Syracuse and any of the big race wins are so satisfying, especially to see all the smiles of the crew. With all the help I get, its good to see it pay off for everybody. It’s gratifying to have those wins.”

The Dirt Modified Hall of Fame is another example of racing’s unique traditions and characteristics that separate it from other sports. The Hall of Fame’s provision to allow active drivers to be inducted means the sport and its fans can honor drivers for their outstanding achievements and still see them race the next night in the Hall of Fame 100. Johnson has won the race twice previously, in 1996 and 2003.

“It really goes to show the longevity of these guys and how good they really are to have the careers they had and still be able to compete at the level they can all these years later,” said Jimmy Phelps, the promoter of Weedsport Speedway and a fellow competitor to Johnson with the Super DIRTcar Series.

“The neat part about this class of inductees is these guys really truly were part of the era that made the Super DIRTcar Series great,” Phelps continued. “Those names were synonymous with it 20-something years ago and are still synonymous with racing today. I think from a fan’s standpoint, I think the vast majority can relate to this year’s class.”

For Johnson, Weedsport is the perfect homecoming for his induction.

“The first time I’ve ever raced was there,” Johnson said. “I used to run the motorcycles and snowmobiles there. I’ve been there since probably ’72 or ’73, so I guess if there was ever a homecoming that would be it.”

With the Super DIRTcar Series in action for the Hall of Fame 100, it’s a can’t-miss event that mixes the history of the sport with its current stars, Phelps said.

“You get tied up in the hustle and bustle of our season and we’re getting into a really busy stretch, but I think that it’s an opportunity to reflect on what it took to get here,” Phelps said.

Advance reserved tickets for the Super DIRTcar Series $10,000-to-win Hall of Fame 100 at Weedsport Speedway on July 11, 2017 are available at www.WeedsportSpeedway.com/Tickets. Additional event information, including gate times and ticket pricing is available at www.WeedsportSpeedway.com/HallofFame100. For more information on the Dirt Modified Hall of Fame and Museum, visit www.dirthalloffame-classiccarmuseum.com.