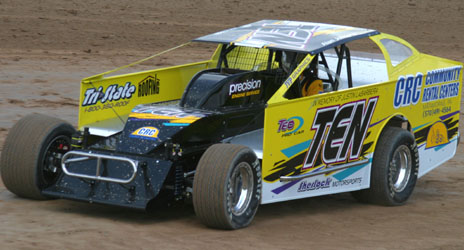 Some New Yorkers reach the age of 50 and depart for Florida looking for a new home. DIRTcar Big-Block Modified legend Alan Johnson will be thinking about only one thing when he heads toward the Sunshine State next week, and scoping out a retirement community is the furthest from his mind.

“I’m starting out with some of the best equipment I’ve ever had so we’re pretty optimistic but I know a lot of things can happen in a short time on this circuit,” said Johnson, who celebrated his own golden anniversary in October. DIRTcar Racing NorthEast’s all-time Big-Block Modified feature winner has been making preparations for the 37th Annual Alltel DIRTcar Nationals at Volusia Speedway Park in Barberville, Fla. ever since. “A key is keeping that same equipment fresh as the summer goes on. It can turn into a long season really quick if things start falling behind.”

Staying on top of the game is the main reason team owners Randy and Robbie Sherlock have reunited with Johnson as they plan a second all-out assault on the demanding Advance Auto Parts Super DIRTcar Series during the 2008 campaign. Their first attempt in ‘05 fizzled as responsibilities on the homefront spoiled what was hoped to be a grand coming out party on the nation’s premier Big-Block tour.

“Our own business really took a toll when we were out on the road,” divulged crew chief Robbie, 44, who owns and operates Tri-State Roofing in Milford, Pa. with younger brother and Modified racer Randy. Robbie also maintains the team cars in his Wurtsboro, N.Y. garage. “We weren’t around enough to keep things running smooth but now we have enough personnel in place which will allow us to follow the whole series.”

“We’re looking forward to a good year although there are still a lot of uncertainties. I can say that everything has turned 360 degrees since 2005. The communication has never been better and Alan has been really enthusiastic, coming down to the shop about every three weeks to work on the cars. Its hard right now to have any big expectations, we’ll just go out and do the best we can from race to race. We’d be happy with a top-5 in points but since it’s Alan behind the wheel I’m sure he’ll probably be aiming a little higher,” Sherlock said.

Johnson is a two-time Alltel DIRTcar Nationals points champion (1983, ‘89), with his lone feature win registered at VSP in 1986. The Phelps, N.Y. native owns 349 more checkered flags in Big-Block competition over the past 32 seasons, including two Advance Series victories registered a year ago. He will be looking for his second tour win for Sherlock Motorsports, dominating the rain-delayed tour race at Hagerstown (Md.) Speedway in the yellow numbered TEN Tri-State Roofing mount in June of ’05. (Pictured Above)

“When Alan first drove for us in 1998 it was just three races at Rolling Wheels (Raceway Park, NY) and he finished every one in the top-five,” recalled Robbie, who entered 15 Advance Series events with Johnson three years ago before calling off the deal on Labor Day despite scoring eight top-10 finishes. “We never got back together until ’05 since we were concentrating more on Randy’s Small-Block career closer to home at Orange County (Fair Speedway), but we always kept the door open. At the end of last year we hooked up at Lebanon Valley and Orange County and have been on the same page with the program ever since.”

“I know most of the tracks in the Advance Series so I feel pretty comfortable getting back on tour. Never been to Virginia or Merrittville but Alan ended up seventh at VMS last May and he’s already won a lot of big races in Canada. Sure he’s a little older now but its obvious he hasn’t lost his touch. Since we’re only running the Big-Block tour this year we can give it our best shot and we want Alan to be ready to go every time out. If he needs a ride for the weekend to stay sharp we can still put something together for Middletown. We’re prepared to do whatever we can,” Sherlock declared.

Johnson continues to be confident with his own talents and is banking on the latest support shone by Sherlock Motorsports to bring him back to center stage. “A lot of times guys put everything into the first part of the season then they run out of money halfway through. We’re expecting a new (ERD) motor before Hagerstown so we should be even better next month.”

“Experience is definitely important on the DIRT circuit and so is good equipment to get the job done,” noted Johnson, who remains the only driver to win at least one Big-Block feature every year of DIRTcar’s existence beginning in 1976; one record that can never be touched. “I know Kenny Schrader is over 50 now, but I’d like to see how good he could do in Jeff Gordon’s Cup car with all that team has behind it. Another win wouldn’t really surprise me considering the number of laps he’s piled up in his career.”

Reserved seat tickets for each night of the Alltel DIRTcar Nationals can be purchased by going online at www.VolusiaSpeedwayPark.com. For those unable to attend any of the shows in person, all the action can be seen on the DIRTVision Cybercast. For just $29.99 fans can purchase the ‘Alltel DIRTcar Nationals Racepass’ and watch live streaming video of the remaining nine nights of racing from Feb. 8-16. Please log on to www.dirtvision.com for more information.