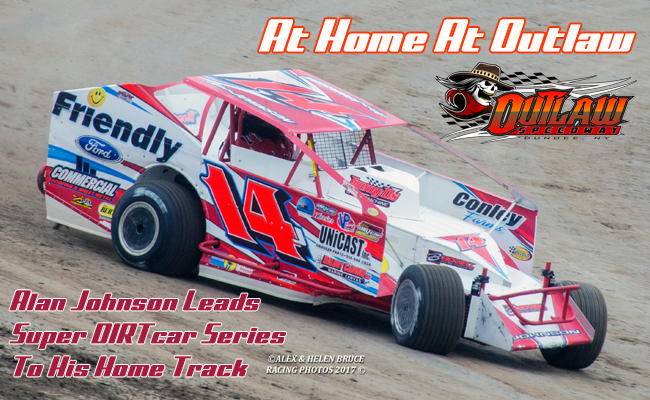 CONCORD, N.C. – June 15, 2017 – When the Super DIRTcar Series takes on Outlaw Speedway on Tuesday, June 20 for the Ultimate Outlaw 100, it will be a home game for full-time Series Driver Alan Johnson. The Middlesex, NY native races weekly on Friday nights at Outlaw, which could offer him a slight advantage entering the event.

The one-third mile track isn’t the trickiest track the Series will visit in 2017, but knowing its quirks could play to the advantage of the hometown regulars, including Johnson.

“It’s a pretty basic track,” Johnson said. “Turn two narrows a little bit. The wall comes up a little quick if you’re up on the outside.”

The Ultimate Outlaw 100 will be only the second points race in Super DIRTcar Series at the Dundee oval. The last time the Series visited was on August 10, 1990 when Alan Johnson’s brother Danny went to victory lane. The only other Series date scheduled at the facility formerly known as Black Rock Speedway, in August 2012, was rained out.

Despite heavy rain throughout the month of May in most of New York, Alan Johnson believes he’ll battle the rest of the Super DIRTcar Series’ best on a slick track.

Johnson, who will be inducted into the Northeast Dirt Modified Hall of Fame in July, already has two wins and a pair of second-place finishes at Outlaw this season. However, to get the 58th Super DIRTcar Series win of his career and his first since claiming a Fourth of July win at Fulton Speedway in 2009, would certainly be special for the 59-year-old who sits fourth on the Series all-time wins list.

“They’re all starting to mean a whole lot more to me because when you get to my age you never know when your last win is going to be your last win,” Johnson said. “We’re enjoying it this year. We have some good running cars, so I would love to get a series win.”

Johnson already has two wins and a pair of runner-up finishes this season at Outlaw. However, the winningest driver so far this year at the track is Super DIRTcar Series point leader Matt Sheppard.

In six weekly races this season at Outlaw, Sheppard has four wins and has finished second to Johnson twice. He also earned his first Series win of the season at Five Mile Point Speedway last Sunday. Suffice to say Sheppard is hot. So, how does Johnson plan to top Sheppard for the third time this season? The same way he tries to at every race.

“We just try to be as fresh as we can with the equipment,” Johnson said. “We put on a little better tire than we would for a regular 30 laps. Other than that, there’s not a whole lot different.”

Race time is 7:00pm for the Ultimate Outlaw 100 on Tuesday, June 20. For additional event information, including admission prices and ticket info, visit www.outlawspeedwayllc.com.