Before stepping into the 2022 Super DIRTcar Series season, featuring a new $200,000 overall championship purse, several new tracks and the 50th NAPA Super DIRT Week, there’s much to celebrate about 2021.

From the Series return to full-time racing to multiple fan-favorite victories, the Super DIRTcar Series produced another season of unforgettable thrills that will serve as everlasting memories for those that experienced them.

BACK TO A FULL TOUR: After the pandemic put a pause on a full tour, and NAPA Super DIRT Week, in 2020, the Beasts of the Northeast returned in full force to tackle 2021 head-on. And while mother nature wasn’t always kind, the Series welcomed back fans and drivers to run more than 20 events in five states across 14 different racetracks – including the 49th NAPA Super DIRT Week at Oswego Speedway.

DIRTcar NATIONALS FLORIDA FUN: The year commenced at Volusia Speedway Park during the DIRTcar Nationals with Stewart Friesen sweeping the first two Features. He then had to leave for his NASCAR duties, opening the door for a couple of fun surprises the next two nights. In his third full-time tour with the Series – first with Coffey-McCreadie Enterprises – Max McLaughlin found his way to Victory Lane on the third night, picking up his second career Series win. Then, on the fourth night, a new face in Victory Lane. Michael Maresca outran Series legends Billy Decker and Matt Sheppard to claim his first Super DIRTcar Series victory.

With rain washing away the final night of racing, McLaughlin was able to hold on to his DIRTcar Nationals Big Gator Championship points lead and leave with the coveted big golden gator trophy.

“Not only have I wanted to win at this racetrack for a long time, but to get a DIRTcar Nationals championship is really special,” McLaughlin said. “I almost got one in 2017 when I tied with Brett Hearn. He ended up winning the final night which gave the championship to him. It’s been bothering me for a few years that we didn’t win it. Now, this makes up for it.”

BIG BLOCK DEBUT AT BRISTOL: For the first time in the history of the Super DIRTcar Series and in the history of Bristol Motor Speedway, Big Block Modifieds graced the dirt surface of “The Last Great Colosseum,” running speeds faster than the NASCAR Cup Series cars. The Series stars put on two unforgettable shows, including Demetrios Drellos’s charge for Stewart Friesen in the closing laps of the second Feature. In the end, Stewart Friesen continued to make history in the Series, sweeping both Bristol races.

PETER BRITTEN BACK IN VICTORY LANE: Becoming a fan-favorite, the kind Aussie had been searching for his second Super DIRTcar Series victory since winning his first at Sharon Speedway in 2017. Grinding and grinding every season to work his way back into the winner’s circle was a never-ending battle. Then, during a single-day doubleheader at Land of Legends Raceway – which he made his home track in 2021 – Peter Britten finally pulled through and earned his second career win.

He also ended up having a career year in 2021, finishing fourth in the Series points standings – his first top-five points finish. Part of that stems from working with his new Bicknell chassis.

“We had a good foundation year, first-year with Bicknell,” Britten said. “Now, hopefully, learned some lessons this year and be even better this coming year.”

MIKE MAHANEY WINS FIRST: After 115 Super DIRTcar Series starts, Mike Mahaney finally did it. He finally got the chance to stand atop his Big Block Modified with the checkered flag in hand and celebrate at Super DIRTcar Series victory. And he did so in dramatic fashion.

During the Massive Malta Weekend at his home track, Albany-Saratoga Speedway, Mahaney lined up to the inside of Stewart Friesen for a late-race restart. When the green flag flew, Mahaney did something very few accomplish, he got the better of Friesen and drove away with the victory.

“I just want to absorb it because it’s taken so long,” Mahaney said in Victory Lane. “It’s been my whole career, 17 years or something, but with this team, we’ve been competitive enough to the point where we should be winning. People have been asking me when it’s going to happen. It’s been something that everyone has been waiting for. All my fans, the team, and my family.”

49th NAPA SUPER DIRT WEEK: The new season brought the eager return of NAPA Super DIRT Week at Oswego Speedway. The week-long event again attracted fans and drivers from across the country for the most prestigious Big Block Modified event in the Northeast. Racing action saw Peter Britten flex his muscle for most of the week, claiming the pole position and leading the first 150 laps of the 200-lap Billy Whittaker Cars 200. Contact with Tyler Dippel sent Britten into the wall and ended his chances at his first Big Block Super DIRT Week title.

The incident helped place a patient Mat Williamson in the lead, who then held off Billy Decker to claim his second consecutive Billy Whittaker Cars 200 win – the first Big Block driver to win back-to-back events at Oswego Speedway.

WORLD FINALS FOR THE AGES: The season-ending NGK NTK World Finals at The Dirt Track at Charlotte produced two memorable Features and two memorable victors. During the first night of Feature racing action, 17-year-old Alex Yankowski shocked the world by winning his first Super DIRTcar Series race in only his second start against a stout field of drivers.

On the second night, fans saw the flip side of the spectrum. Dirt Modified legend and Hall of Famer, Brett Hearn, at 63 years old, returned to Victory Lane for the first time with the Series since 2018. In doing so, he claimed his 450th DIRTcar sanctioned win and his 920th career Feature win overall.

“What a storyline,” Hearn said in Victory Lane. “How old is he? [Referring to Yankowski]. Seventeen and I am a 63-year-old. He’s just gotta keep doing what he’s doing. He’s awesome. I watched the highlights of his race last night and was just spot on. It’s not an easy game. Guys are going to take their turns. It’s just cool to see two different guys in Victory Lane.”

At the end of the night, Matt Sheppard – with four Series wins in 2021 – was awarded his eighth Super DIRTcar Series title, surpassing Hearn for the most Series championships of all time.

EARLY STORYLINES FOR 2022:
–2022 schedule features six states – a first in 15 years – including the Series’ return to Pennsylvania and Ohio
-The 2022 overall points fund has been increased to $200,000 with the champion earning $60,000
-NAPA Super DIRT Week celebrates its 50th year with several surprises to come
-Max McLaughlin returns to Heinke-Baldwin Racing for the full 2022 tour
-Anthony Perrego will make his debut as a full-time Series driver in 2022 with Four Star Racing
-Matt Sheppard will look to extend his reign by going after his ninth Series title
-Mat Williamson will try to target three consecutive NAPA Super DIRT Week titles

The 2022 Super DIRTcar Series season kicks off again in Volusia Speedway Park during the DIRTcar Nationals (Feb. 14-19). The Big Block stars will be joined by the DIRTcar Late Models, World of Outlaws Late Models and Xtreme Outlaws Sprint Cars throughout the week.

If you can’t make it to any of the races, you can watch the full tour live on DIRTVision – either online or with the DIRTVision App. 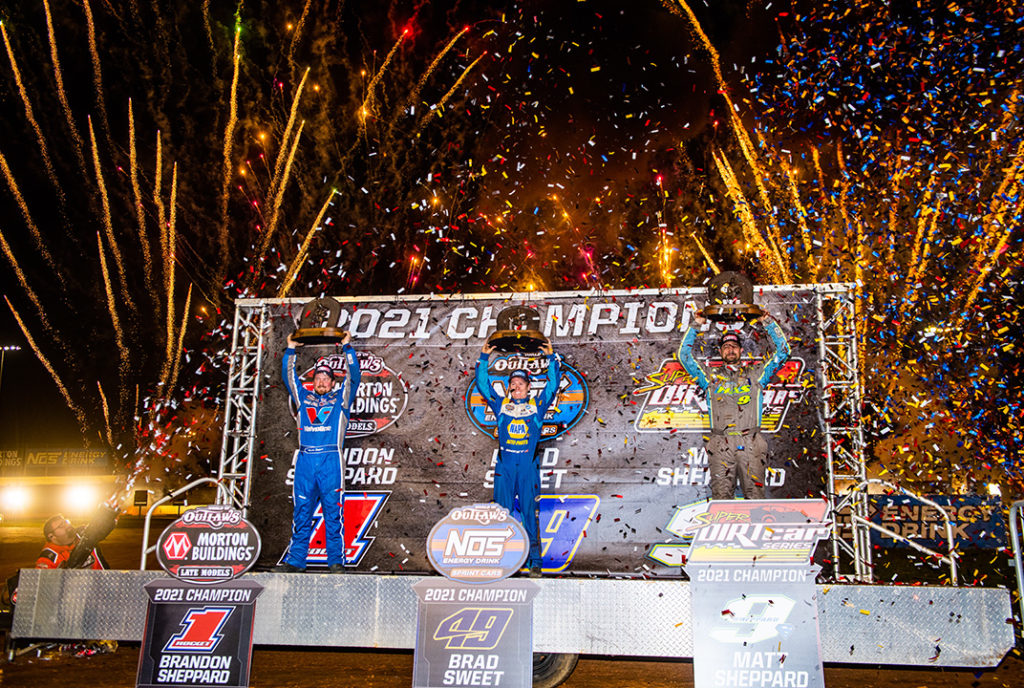