A CHAMPIONSHIP DOWN TO A “T” 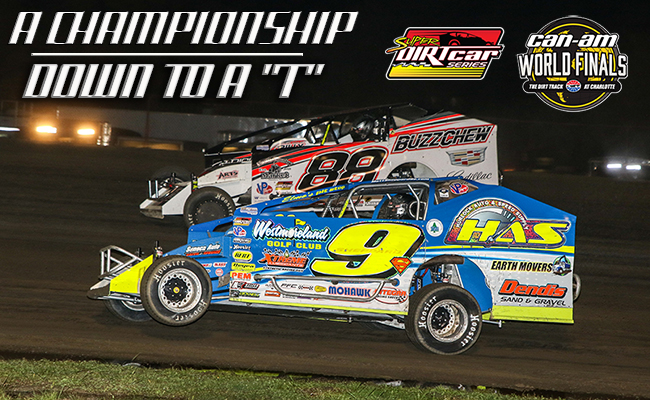 CONCORD, NC — Nov. 4, 2019 — The Can-Am World Finals at The Dirt Track at Charlotte is set to host one of the tightest Super DIRTcar Series championship points races in history. Mat Williamson has won three out of the past five Series races, including NAPA Super DIRT Week XLVIII’s Billy Whittaker Cars 200, launching him into a neck-and-neck race for the title with Matt Sheppard. Sheppard has nine Series wins to his credit in 2019, but Williamson’s consistency has kept him in the hunt all season long.

Last year Erick Rudolph was the man trying to take down ‘Super’ Matt Sheppard, but he fell short at The Dirt Track at Charlotte. The 2019 race has Sheppard up on Williamson by a mere six points. Unfortunately for Sheppard, the No. 9S suffered a mechanical failure at Oswego Speedway with absolutely vital points on the line.

Meanwhile, Williamson did everything he could do for points by becoming only the second Canadian national to win the Billy Whittaker Cars 200. Sheppard swung right back the next week at Brockville Ontario Speedway with a statement win, coming from 12th to win.

The pair of Mat(t)s are separated by just six points heading into the Cam-Am World Finals doubleheader. Last year, a pair of veterans collected the wins. Brett Hearn and Tim Fuller showed the premier field of Big Block Modifieds the way around the Carolina clay oval.

A great class of rookies is vying for Rookie of the Year honors and race wins. Demetrios Drellos won the biggest race of his career at Albany-Saratoga in a NAPA Super DIRT Week qualifier.

Saratoga Springs’ Jack Lehner led over half of the 100-lap Feature at Brockville and finished a career-high fifth place. Can he pick up his first career win in front of the biggest crowd in dirt racing?

Ryan Godown, from Ringoes, NJ, has been knocking on the door of his first Super DIRTcar Series win all year long. He came the closest at the Battle on the Midway at Orange County Fair Speedway where he finished runner-up to Matt Sheppard.

Never count out the Gypsum Racing team as they’ll be bringing the heat down to Charlotte with one goal: Win. Larry Wight and Billy Decker are running third and fourth in Series points, but star driver and three-time DIRTcar 358 Modified Series driver Erick Rudolph is looking to leap from both of them to take third in Series points.

Jimmy Phelps hasn’t had the 2019 season he envisioned but with a brand new Bicknell chassis, he’s looking to capture momentum going into 2020. Can The Baldwinsville Bandit play spoiler and lock up a pair of wins amidst the Championship battle?

In his familiar orange No. 27J, Danny Johnson is one of the greatest Big Block Modified drivers of all time. Johnson was inducted into the DIRT Hall of Fame this year and wants to close out his historic season in Victory Lane.

Series regulars Marcus Dinkins, Paul St-Sauveur and Rusty Smith will also be on hand to test their Big Blocks on the red North Carolina clay.

There are always plenty of invaders looking to put their names in the record books as winners on The Dirt Track at Charlotte. Gary Tomkins, Anthony Perrego, Max McLaughlin, Billy Pauch Jr., Chris Hile, Phil Vigneri, Yan Bussiere, Justin Wright and Tyler Siri have all thrown their hats in the ring.

The Can-Am World Finals at The Dirt Track at Charlotte have included the Super DIRTcar Series since 2010. Every year it proves itself to be the premier dirt track racing event in the world. All three top series will be on hand once again to thrill the capacity crowd. Don’t miss it!