Fifty years of NAPA Super DIRT Week history will be bestowed upon the Billy Whittaker Cars 200 champion in October.

The stories and legacy of the event will be encapsulated in a more than two-foot-tall golden cup like no other.

Upon first glance, the 50th logo draws your eyes to the trophy’s center before venturing around the sleek curves and angles of its unique design. But what you’ll miss, if not careful, is the story it tells.

At the base of the trophy and at the top are black acrylic ovals. From any side view, they appear as another element of the design. However, look from the top and you’re transported through time.

The black oval at the base is the exact shape of the Syracuse “Moody Mile,” the treasured track that birthed Super DIRT Week and hosted the event from 1972 to 2015 before being torn down. At the top of the trophy, the smaller black oval is the exact shape of the “Steel Palace” Oswego Speedway, which became the new home for Super DIRT Week in 2016 and will host the historic 50th running of the event this year, Oct. 3-9.

“Between the history and significance of the race, there is no bigger event this year than the 50th NAPA Super DIRT Week,” said Jeff Hachmann, DIRTcar Executive Director of Events. “We wanted to emphasize that with this year’s trophy for the Billy Whittaker Cars 200 by highlighting the history of the event and its roots that we all cherish.”

When you look at the trophy again from the front or sides, you’ll see the “Moody Mile” is represented at the bottom to indicate how it laid the groundwork and holds the weight of the event’s historic 50-year run. The golden metal cup rises from the “Moody Mile,” indicating the years of success and growth that led to the 50th Running and support of its new home at the “Steel Palace.”

“This is a one-of-a-kind trophy that will only be handed out this year,” Hachmann added. “Only one driver in the history of the event will have this trophy, which is why we wanted to make sure the design also signified that importance.” 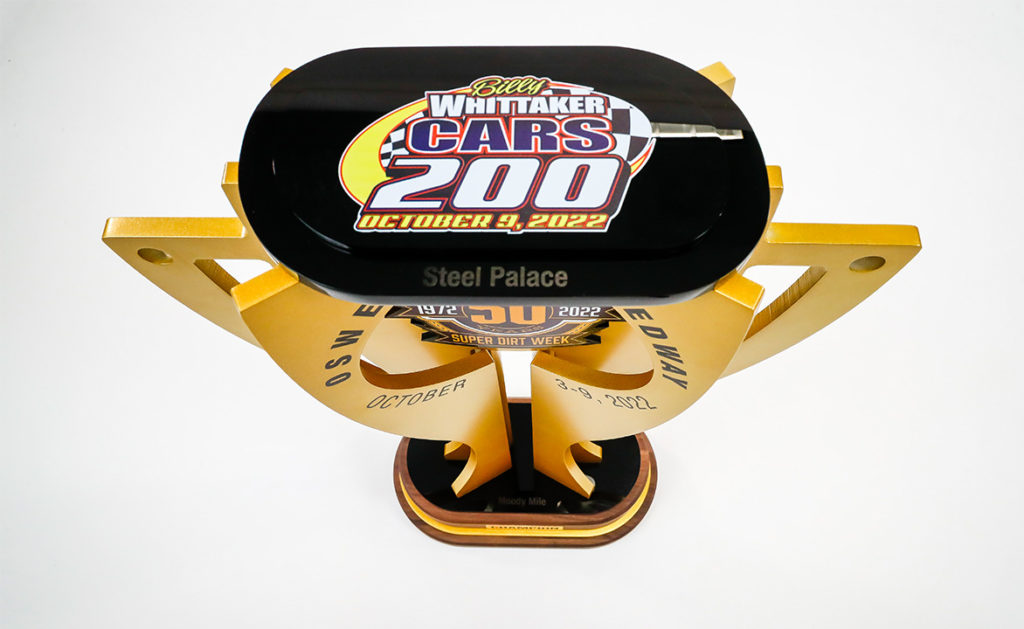 The trophy, which will be more than 27 inches tall and 17 inches wide (from handle to handle), is being made by MTM Recognition – which has also made iconic trophies for college football championships. Having just celebrated their own 50th anniversary last year, they took the design to heart, making a trophy, unlike anything they’ve done before.

“For us, the track outline is something we’ve never done before,” said CJ Norton, an account manager at MTM. “We always start off with a little bit of directions and then go from there. We have lots of different cup ideas that we’re trying. Cups are kind of standard in the industry. We’ve kind of taken a couple different changes from the traditional cup like this and did and outline of a cup.”

Finished in May in preparation for a year-long trophy tour across New York – spanning to areas like Time Square in New York City, Niagara Falls, Watkins Glen and more – the trophy went through a comprehensive engineering process.

Engineers drew up a schematic, down to the nuts and bolts and pathways. Then, it went into manufacturing with the wooden base being cut out by a CNC machine and all the metal pieces cut with a water jet machine.

The historic significance of the event was never lost throughout the process, as the trophy was made to weigh 35 lbs. – the same number of miles between the “Moody Mile” and the “Steel Palace.”

The final product is a polished relic of history, bestowed upon only one drive who can master 200 laps around the 5/8-mile “Steel Palace” and forever be engraved in the history of Super DIRT Week.

Keep track of SuperDIRTWeek.com for the upcoming full trophy tour schedule and visit the site to purchase your tickets to the 50th NAPA Super DIRT Week.