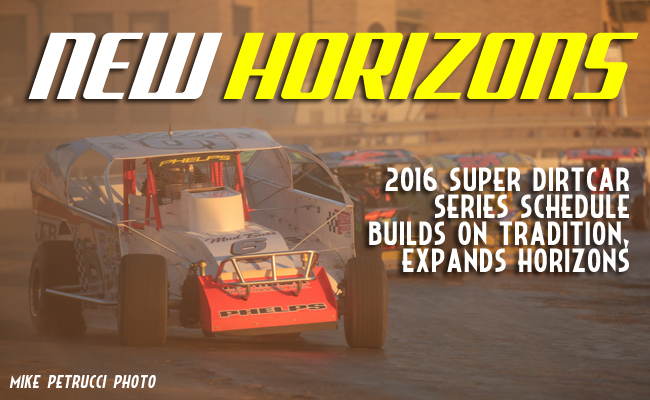 CONCORD, N.C. – Dec. 8, 2015 – The Super DIRTcar Big-Block Modified Series announced the 2016 schedule which features 29 dates at 23 different tracks and takes the series to Williams Grove Speedway and Eldora Speedway for the first time in a decade.

For the third straight year the series kicks off its regular season at Fulton Speedway with the High Bank Hold-Up on Saturday, April 30. The event punctuates a season of blockbuster events throughout the Northeast, Midwest and Canada.

One of the most anticipated dates on the series schedule, the BIG Show 8 at Albany-Saratoga Speedway, returns on June 28 as the season heats up through the summer. In the midst of that summer stretch, the series takes on Weedsport Speedway for the Hall of Fame 100 on August 9.

The Super DIRTcar Series also makes two swings through Quebec, once in July and again in September.

The series season wraps up at the Dirt Track at Charlotte for the Bad Boy Buggies World Finals, October 27 to 29, 2016.

The 2016 DIRTcar 358-Modified Series final nine race schedule was also announced along with the full schedules for the DIRTcar Sportsman Series and DIRTcar Pro Stock Series. The 2016 regional format and schedules for the 358-modifieds will be announced in the coming weeks. Drivers in the DIRTcar Sportsman Series will now be able to drop their four lowest finishes from the first part of the season.

To learn more about the Super DIRTcar Big-Block Modified Series and to find out how to purchase tickets for all of the series’ events, visit http://www.SuperDIRTcarSeries.com.