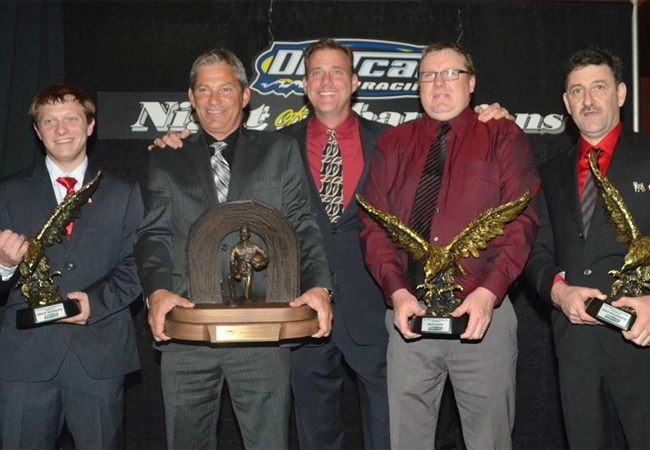 LIVERPOOL, N.Y. – November 28, 2013 – Again this year, DIRTcar Racing Northeast drivers, teams, car owners and partners have set the bar higher, and their accomplishments were recognized Saturday, Nov. 23, during the DIRTcar “Night of Champions” at the Holiday Inn Syracuse-Liverpool.

“We don’t really get to enjoy the races that we win because we’re always thinking about the next race. This is the only time, the banquet, that we get to celebrate it,” Hearn said. “This time in a week, we’re going to be sitting around and talking about Volusia.”

Hearn hasn’t just been breaking records, he’s been shattering them since his powerful comeback last year. He is the only driver to have claimed eight Super DIRTcar Series Championship titles; the only driver coming close is Jack Johnson with six series championships. With his win in last year’s series finale during the World of Outlaws World Finals at The Dirt Track at Charlotte, Brett Hearn tied Alan Johnson in all time DIRTcar race wins. This year, he’s claimed an additional nine victories to keep him at the top of the list.

At the same time, Hearn proved his ability to rise to new challenges. He took victory August in his first-ever race at I-96 Speedway in Lake Odessa, Mich., adding Michigan to list of states where he has claimed wins. After his 2014 season, Hearn has won races in a total of nine states and two Canadian provinces.

The legendary driver has also been dabbling in event promotion the past few years, and Brett Hearn’s “The Big Show” continues to grow. Hearn partnered with Albany-Saratoga Speedway in Malta, N. Y., to host the season’s big race night, which featured full shows for the Super DIRTcar Big-Block Modified Series and the DIRTcar Pro Stock Series. This year Hearn accomplished something at his race he hasn’t been able to do in the past – he picked up the win in the Big-Block Modified 100-lapper.

Hearn and his car owner, Brian Madsen of Madsen Motorsports, thanked their entire team, both sponsors and crew members.

“A lot comes with a good crew, a good team,” Madsen said. “The guys that come up at night to the shop, a couple of them, and the ones on the road, it’s really about them.”

Hearn wasn’t the only driver to carry out two trophies from the “Night of Champions” banquet. Erick Rudolph also won the series champion and Mr. DIRTcar championship in his division, the 358-Modifieds.

“This has been a good year for us,” Rudolph said. “This is definitely a career highlight.”

Years of hard work have paid off for other drivers who claimed their first Hoosier Tire-VP Racing Fuels DIRTcar Series Championships. Brad Rouse, of St. Catharines, Ontario, claimed two victories in the DIRTcar Sportsman Modified Series to make his way to the championship title. Perhaps the highlight of his season was a win at the Syracuse “Moody Mile” in the NAPA Auto Parts Super DIRT Week XLII Sportsman Modified Championship.

“Ee just went in there to get in the show and take as many points as we could, but you pick up the win that’s really something,” Rouse reflected on Syracuse after pickup up his series championship trophy. “It’s a great honor being there with a lot of the great runners there.”

“It feels great,” Bissonnette said, thanking crew members, sponsors and drivers like Joey Ladouceur and Rob Yetman who have given him advice throughout the years.  “I’ve been trying to do this for several years now.”

Yetman took the trophy for Mr. DIRTcar Pro Stock points with ten wins throughout the season, one of those wins being during NAPA Auto Parts Super DIRT Week XLII.

“That win at Syracuse really capped it off,” Yetman said. “We’ve been waiting to win that one for ten, fifteen years.”

Steve Bernier was crowned the MR. DIRTcar Sportsman Modified Champion with 12 DIRTcar wins throughout the season.

“I’m really glad to be here with this level of drivers,” Bernier said.

In addition to celebrating a great 2013, DIRTcar drivers, officials and partners looked forward to an even better year of racing in 2014.

“All through the year we’re growing again. We had an incredible Syracuse, an incredible World Finals,” said World Racing Group chairman and CEO Brian Carter. “It only means it’s going to be bigger and better for 2014.”

These traveling tours take the best drivers across the region to do battle at some of the Northeast’s premier race tracks.

In its third year, the Mr. DIRTcar points fund awards points to drivers based on their best 16 finishes in their respective divisions.

2013 Season in Review – Rookies of the Year and Special Awards