Matt Sheppard, from Waterloo NY, is without a doubt, one of the greatest Super DIRTcar Series drivers of all time. The pilot of the No. 9s has recorded eight Series championships to his name.

Sheppard’s precision, speed, and racecraft has made him near unstoppable force on the tour. He won four championships in a row before being bested in 2019 in one of the closest Series points finishes ever by another Mat, Mat Williamson.

The Waterloo driver’s first Series win came in the province of Quebec at Autodrome Drummond in 2004. His last win came at the Northeast Fall Nationals at Brockville Ontario Speedway when he took the checkered flag and the points lead heading in the 2019’s Can-Am World Finals. 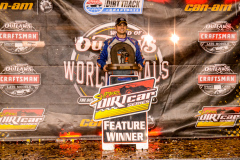