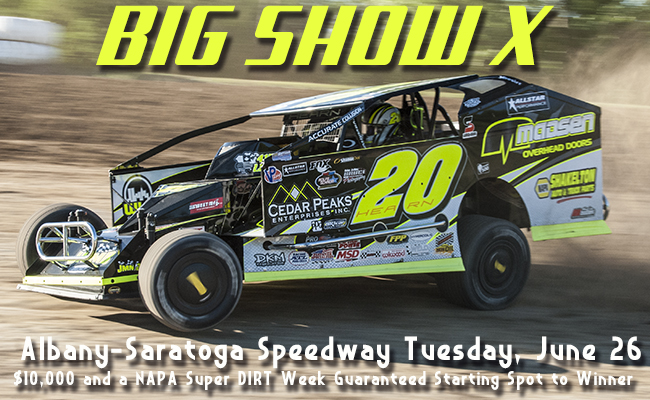 CONCORD, NC – June 18, 2018 – On Tuesday, June 26 the Albany-Saratoga Speedway hosts The Big Show X with a $10,000 check for the winner and guaranteed starting position in the 47th running of NAPA Super DIRT Week. After ten years of incredible racing, this year’s Big Show has all the elements to make for a memorable Super DIRTcar Series race. The Championship chase is young and so is HBR no. 6H driver Max McLaughlin, the 18-year-old who appears to be on his way to having a banner season. NASCAR Camping World Truck Series breakout driver Stewart Friesen will join the Super DIRTcar Series at Albany-Saratoga Speedway in the Halmar Racing no. 44 as well. Friesen is looking to snatch the $10,000-to-win prize money and assert his dominance in the first two of seven NAPA Super DIRT Week Qualifiers.