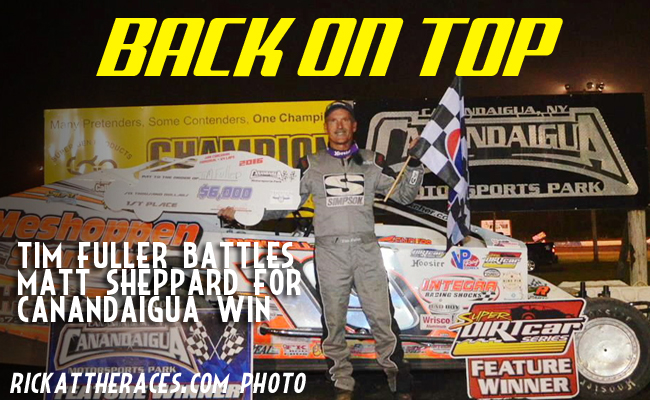 “The car was really good tonight. Matt is really good and to be able to run with him throughout the year has helped. If I could finished second to Matt that would be like a win,” said Fuller in victory lane after taking home the $6,000 payday.

Gary Tomkins, who led the 30-car field to the green flag, found himself in second before scoring the first lap as Brett Hearn, the outside pole sitter, took flight outside of turn three and gained the lead. Behind Hearn, Tomkins and Sheppard battled back and forth for second place. Sheppard took over second place by lap four.

CANANDAIGUA, N.Y. – June 30, 2016 – Matt Sheppard looked poised to continue his Canandaigua Motorsports Park dominance Thursday night but Tim Fuller battled forward and around Sheppard and then held off the reigning series champion late to score his first points win of the season.