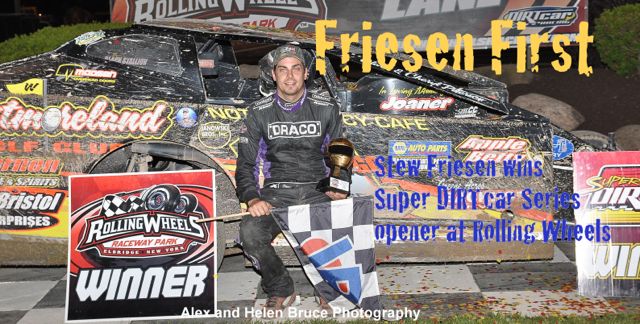 ELBRIDGE, N. Y. – June 6, 2013 – After a night of history at the Dirt Motorsports Hall of Fame, Rolling Wheels Raceway Park experienced its own night of history in the making for the DIRTcar Hall of Fame 60 Wednesday, June 5. As Tuesday’s Dirt Motorsports Hall of Fame honorees looked upon “The Fast Track,” as Big-Block Modified star Stewart Friesen claimed the coveted Super DIRTcar Series 60-lap victory, the first series points race of the season.

“This is one of the most historic places on the circuit that we go to and to win here, it means so much,” Friesen said. “We had a perfect night. The car unloaded well, we were strong in practice, had a great time trial run, and that set the tone for the rest of the night.”