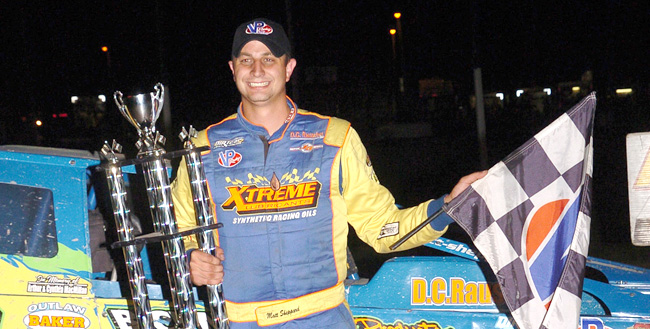 THOROLD, Ontario – Aug. 1, 2011 – Matt Sheppard used lapped traffic to slip past Chad Brachmann late in the Bob St. Amand Sr. Memorial 100 Monday night at Merrittville Speedway to pick up his third Super DIRTcar Series Big-Block Modified win of the year. Earlier in the evening, Brett Hearn earned the 798th victory of his career by winning the DIRTcar 358-Modified event postponed from May 23.

A huge night of racing action was on tap at the track near St. Catharines, Ontario, as a season-high 54 cars attempted to qualify for the Big-Block Modified event, which followed the 75-lap completion of the DIRTcar 358-Modified feature that had been postponed by rain on May 23. (Alex and Helen Bruce photo)