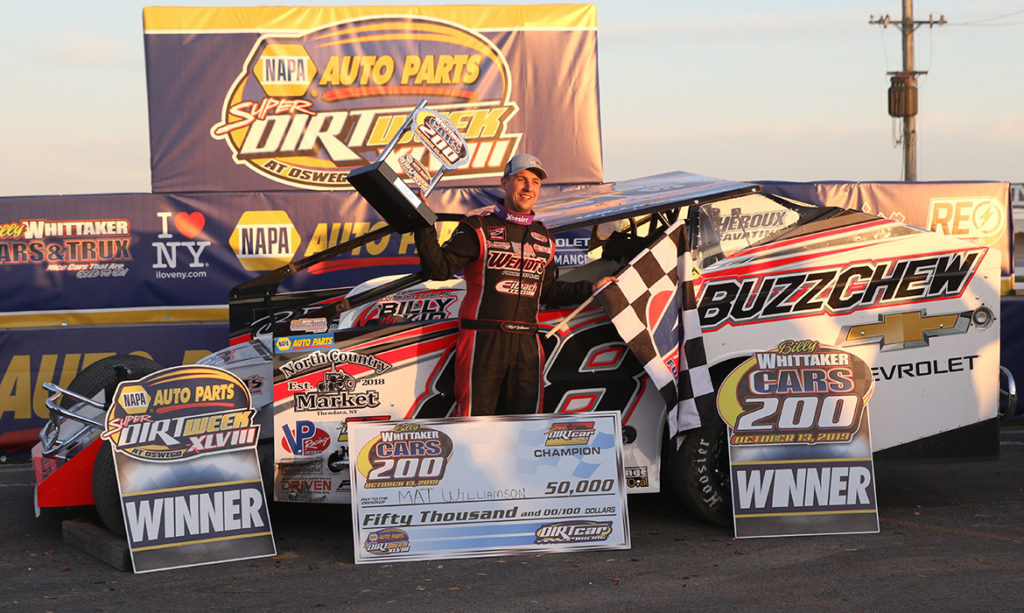 OSWEGO, NY – Oct. 13, 2019 — Would he make it or not? The closing laps of Sunday’s Billy Whittaker Cars 200 capped a drama-filled NAPA Auto Parts Super DIRT Week at Oswego Speedway, where Mat Williamson had enough fuel to charge to the checkers while the car that was closing fast did not.

A late caution set up a shootout to the checkered flag. Williamson, a 29-year-old from St. Catherines, Ontario, was in front with an even younger Anthony Perrego and the sport’s winningest driver, Brett Hearn, closing hard. Then, on the last lap and hoping to pounce on Williamson, former winner Tim Fuller swung around Hearn in turn two, then Perrego’s machine suddenly ran out of fuel and slowed as Williamson raced under the checkers with Fuller in second and Hearn third.

In a breakout season for Williamson, winning his first $50,000 Billy Whittaker Cars 200 — joining Stewart Friesen as the only Canadians to win the race — etches his name in the record book among the greatest drivers in the history of Big Block Modified racing.

“Wow! What a dream season,” Williamson said. “When we got hooked up with Buzz and Brian, and the whole Buzz Chew team, I was more than excited about it. I know how much work they put into it and how much they deserve to win a race like this. When we got it done at Orange County this year it was awesome, but I’ve wanted to win this one for a long time. I grew up watching races like this. It’s incredible to get it done.”

Williamson was ecstatic in Victory Lane. The Buzz Chew team swarmed the car in celebration and the winner was quick to recognize them.

“I have such great guys behind me,” Williamson said. “I say it every time, but I can’t say it enough. Those guys are so smart in the pit area. At the beginning of the week I told them that the less I had to worry about, the better we would be. I told them it’s whatever they want to do for strategy. I could never say we lost a race because of what they did. We nailed it today. It’s incredible.”

As it turned out, the win was also a huge gain for Williamson in the Super DIRTcar Series championship points race. Leader Matt Sheppard failed to complete the 200-lapper, finishing 31st.

“I think it was a good points night to catch Matt,” Williamson said. “I know he didn’t finish. Hopefully we narrowed that gap and we can be there at the end.”

The points race comes down to the Northeast Fall Nationals next weekend at Brockville Ontario Speedway and the Can-Am World Finals Nov. 7-9 at the Dirt Track at Charlotte.

But at Oswego, North Country hero Fuller parked the black St. Lawrence Radiology No. 19 firmly in second place after making up two positions on the final restart.

“I was fourth with two laps to go,” Fuller said. “We struggled all day. We fought back to second. Who would’ve thought?”

Fuller’s small band of dedicated crew members worked hard to keep the No. 19 up front coming off pit lane.

Hearn is accustomed to being up front during NAPA Super DIRT Week, but the his road to the front was a rocky one.

“The strategy that we had at the beginning of the race wasn’t going to work with all the early yellows,” he said of the wild first 100 laps. “I got a left front flat. I got into a little jingle on a restart. We had to get back into the pits anyway. We lost all of our track position and I thought we were in trouble. But I came through subtly.”

But there was nothing subtle about the way Hearn worked aggressive lines and great restarts to knife his way through traffic and back to the front.

“I made some good passes and before you knew it, I was in the top five,” he said. “At one point there with 10 laps to go, I thought we had the fastest car on the track. All in all, not a bad day for us.”

Billy Decker captured the $1,000 STOP Tech/GPS Pole Award and piloted the No. 91 Gypsum Express to Saturday’s 150-lap DIRTcar 358 Modified victory, but his hopes of doubling up on the weekend wasn’t to be as he rebounded from early contact for an eighth-place finish.

Eight-time Super DIRTcar Series champion Sheppard put his No. 9s on the outside pole and picked up the $750 award from long-time partners Dig Safely 811 NY. Unfortunately, a mechanical failure on lap 122 forced the two-time Billy Whittaker Cars 200 winner to retire from the event.

From tearing around the Talladega high-banks in his NASCAR Truck to thundering through Oswego with his Super DIRTcar Series Big Block Modified, Stewart Friesen had his work cut out for him. Due to his conflicting race schedule, Friesen was forced to rely on a guaranteed starting spot he earned winning The Big Show XI earlier in the season.

Starting 31st, Friesen made ground all day working his way up to sixth, which was good enough for the KSE Hard Charger Award. The 25 positions the No. 44 advanced was just one car more that third-place finishing Hearn.

There is one award no one wants to get and that’s the Hard Luck Award. However, great sponsors like Bart Contracting step up to help out the drivers who might need some help just getting their car on the trailer. This year’s Bart Contracting Hard Luck Award goes to Alan Johnson, who was involved in a chaotic turn 3 melee that put his No. 14J on its roof. Johnson and company received $1,000 for their mishap.

Area Auto Racing News has long been a partner with NAPA Super DIRT Week with the Best Appearing Car sponsorship. Jessey Mueller’s vibrant blue and yellow No. 19 was a standout paint scheme amongst over 300 other polished racing machines. Mueller was strong all week in both modified divisions, but his Billy Whittaker Cars 200 was cut short by a broken left rear shock mount.

Next up for the Super DIRTcar Series is the Loud & Dirty Northeast Fall Nationals, where vital Championship points are up for grabs. With only 10 points separating Sheppard and Williamson, it could be a decisive Feature in the 2019 battle for supremacy in Big Block Modified racing.