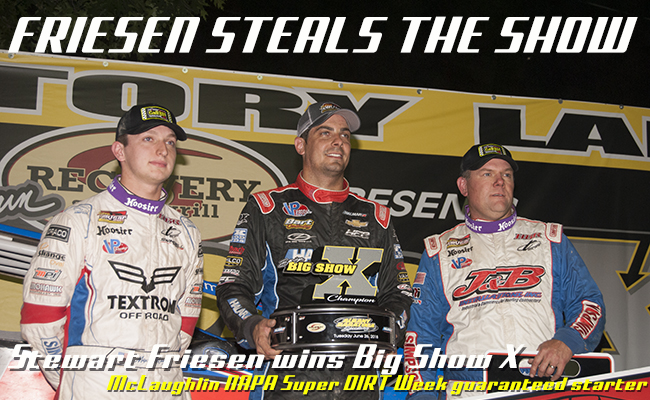 Stewart Friesen Took Home the $10,000 prize and Max McLaughlin is a Guaranteed Starter at the 47th NAPA Super DIRT Week

MALTA, NY – June 26, 2018 – Stewart Friesen held his son high above the Halmar Racing no. 44 in Victory Lane after taking the checkered flag at Albany-Saratoga Speedway. When the NASCAR Camping World Truck Series rising star moved up into second place, he thought that would be as far as he would get with Matt Sheppard walking away from the field. Sheppard, who had lead 95 laps from the pole, got tangled up with the lapped competitor Willy Decker, and spun out between turns one and two. The field streamed by the stalled no. 9s, which gave Friesen the top spot with only 5 laps remaining. From there on it was a shootout with the HBR team cars of Max McLaughlin and Jimmy Phelps. The no. 6H and no. 98H thrilled the crowd by dicing high and low for position but as they battled amongst themselves, the no. 44 of Friesen pulled away.

“I’ll take them any way I can get them. It was real tough. The track just got super slick.” Friesen didn’t believe he had a good shot at Sheppard late in the race. “I hung with him on the top for a few laps but he eventually inched away. I just couldn’t turn on the bottom like he can. We wished to pass Matt under open track conditions but we’ll take it.” And take it he did as Stewart Friesen was joined by his young son Parker and wife Jessica in Victory Lane. “That’s what it’s all about [looking at his son, waving around the checkered flag]. He changed our lives and I love him to death. I gotta thank Jess for everything that she does. Thanks to everybody who supports the show and thanks to Brett. It’s such a marquee event on our schedule.”

Friesen has had some near misses with the Winner’s Circle in the NASCAR Camping World Truck Series races in 2018. “We keep using up all our luck at these dirt races. And we go there on the weekends and getting skunked out. We really appreciate all our fans in the northeast tuning in to the NASCAR Camping World Truck races on TV and interacting on social media. It’s really cool to represent the area and do it the right way. I appreciate getting some of Brett’s money too, that doesn’t happen too often.”

HBR’s young gun Mad Max McLaughlin came up just short again to Stewart Friesen. “Third Series race of the year and my second, second place finish to Stewart Friesen. I gotta keep running all the races. The more you run the better you get. Our cars are really close right now. My teammate Jimmy Phelps is really fast. It’s tough to beat Sheppard and Friesen any time. Those two are at the top of our sport. A second to him is a win to most.” McLaughlin was disappointed to fall just short of his first Super DIRTcar Series win but pleased that he is a guaranteed starter at the 47th annual NAPA Super DIRT Week.

Third place finisher Jimmy Phelps echoed his teammate’s sentiments. “We’re fortunate to have really good race cars. I gotta thank Alan and Judy and everyone at Mohawk Northeast and HBR. I’ve got a great teammate here, [Max McLaughlin] and the cars are running real well. We got some track position late but Max just shook me on the restart. Great job for HBR tonight. I’m happy for everybody.”

The Dig Safely NY 811 Redraw was completed with the drivers in their cars and ready to start the race. The top 10 were unaware of where they would start when they strapped into their Big-Block Modifieds, which added some excitement to the redraw. The draw that brought the biggest reaction from the crowd was Matt Sheppard, who picked the pole position, and then nearly won it. Before his lap 95 spin, Sheppard had lead 195 consecutive Super DIRTcar Series laps, going back to his flag-to-flag win at Brewerton Speedway.

The KSE Hard Charger was Tim McCreadie, who picked up 13 positions starting from 21st and making his way through the field up to 8th. Tim Fuller put in a commanding lap in Time Trials and won the Billy Whitaker Cars & Trux Fast-Time Award by a few thousandths of a second over race winner Stewart Friesen. The next Super DIRTcar Series race takes place on Sunday July 1st at Cornwall Motor Speedway in Ontario. We’ll see you at the races.