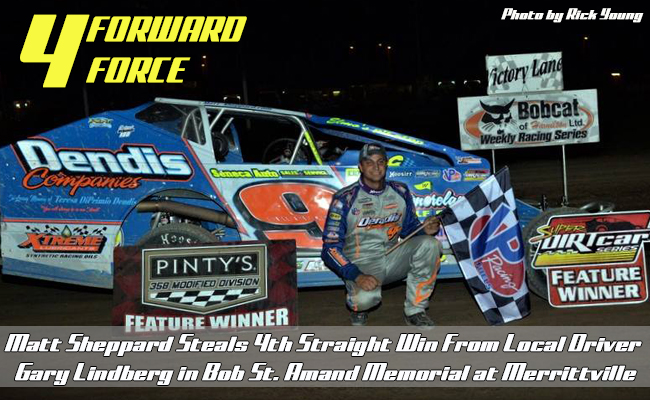 MERRITTVILLE, ON, CAN – August 9, 2017 – Matt Sheppard drove past Gary Lindberg in the outside lane following a lap 81 restart to take the lead on lap 85 and then paced the final 16 laps to win his second straight Bob St. Amand Memorial 100 at Merrittville Speedway on Wednesday night.

The victory was also his fourth straight with the Super DIRTcar Series and second in as many nights after he also won Tuesday at Ransomville Speedway. Lindberg, a Merrittville weekly 358 (Small Block) Modified regular, gave everything he had to keep pace with Sheppard, but came up 1.203 seconds short of his first career Series victory.

“We have had some really good racecars and some really good luck. That’s what it takes,” Sheppard said of his four-race win streak. “Going back five races to Sharon, I thought we had a shot at winning that and got a flat tire late in the race. We were pretty good up in Quebec, good again last night and tonight I didn’t think we were nearly as good, but we had a little bit of luck.”

Sheppard’s good luck was at the expense of Erick Rudolph’s misfortune during the most dramatic point of the race. Lindberg and Rudolph had broken away from the rest of the pack in the top two spots. As the race reached its final quarter, Rudolph zeroed in on Lindberg amongst the lapped traffic and pulled to his back bumper after erasing a two-second deficit.

However, Rudolph’s bid for the lead ended with 81 laps completed when he tried to race under Lindberg, who was running a half groove off the bottom of the track, in turn three. The two drivers made contact in the middle of the corner and the result Rudolph facing the wrong way in front of the field.

The ensuing restart moved Sheppard from third to the outside of the front row beside Lindberg. The Waterloo, NY native made the most of the outside groove and took the lead from Lindberg on lap 85 after a four-lap side-by-side battle on the icy slick track.

“The turning point of that race was when Rudolph tangled and spun around there,” Sheppard said of the incident that halted a 51-lap green-flag run. “That kind of reset the field and gave me a little bit of open racetrack. That’s kind of what we needed with the Big Block. We needed to keep our momentum up. I got up top and was able to get it rolling and just got it rolling well enough to get around Gary.”

While Sheppard held the point, Lindberg kept within striking distance over the next 10 laps until the final caution flag of the race waved with five laps remaining when Fred Carleton rode the outside retaining wall to a stop on the frontstretch. Contrary to most situations, Sheppard was actually happy to see the yellow flag.

“That string of cautions really helped out,” Sheppard said. “I would have never got around Gary without the yellow and then I didn’t mind seeing that yellow with five to go. It gave me a little bit of open racetrack because I had to use every bit of it and even some more on the front stretch.”

Sheppard and many of the drivers resorted to dipping the right-side wheels into the moat on the frontstretch to find grip for the straightaway which was devoid of moisture elsewhere. That same slick track played to the benefit of Lindberg and the other Merrittville Small Block regulars.

“The track conditions helped and so did starting up front,” Lindberg said. “I thought I was a sitting duck up there and luckily we held on as long as we did. The guys put a good car under me this week.”

Billy Decker completed the podium with a third-place finish. Decker’s second top-three result in as many nights extended his point lead over Larry Wight, who finished ninth.

“We’re not worried about everybody else,” Decker quipped in Victory Lane. “We’re just trying to take care of our own program. The Page Trucking car was pretty dogone good tonight. It was tough sledding. The boys at Mike Payne Racing work really hard and Textron’s on board. We’re having a pretty good year. We had a good run and had a lot of fun.”

Prior to the lap 81 caution, the race had run under green conditions since a lap 30 restart. Before the extended run, the race experienced a slower pace than in the second half of the race. The initial start was slowed when Tommy Flannigan and Rich Scagliotta tangled together in turn four before the first lap was completed.

When the race got up to speed, polesitter Max McLaughlin took the lead with Lindberg quickly in tow. As the track slicked off, Lindberg was able to gain more on McLaughlin and was able to take the lead in turn two off a lap 13 restart.

The third caution of the race came on lap 22 when Brett Hearn, Pat Ward and Mark D’Ilario made contact and were collected against the inside wall in turn four. The lap 30 restart allowed Lindberg to build his lead to over three seconds ahead of McLaughlin at the halfway mark.

Rudolph, who ran inside the top-five most of the first half, entered a three-car battle for second with McLaughlin and Sanborn, NY driver Chad Brachmann. Brachmann took second initially on lap 53 before Rudolph took the spot on lap 63.

Rudolph hit his stride at that point and began to reel in Lindberg, who was working flawlessly through heavy lapped traffic. In less than 10 laps, Rudolph erased a two-second Lindberg advantage. Rudolph tried the inside lane in turn two on lap 76 and the two drivers made sight contact on the backstretch. Then, on lap 81, Rudolph’s hope for the victory ended with his spin in turn three, but earned him the Speedy First Aid Hard Luck award. He raced back to a 10th-place finish.

McLaughlin was the night’s Fast Qualifier with a lap of 16.692 seconds and the winner of heat two. Matt Sheppard, Ryan Susice and Billy Decker also picked up heat race winners. Mark D’Ilario from nearby Vineland, Ont. won the Last Chance Qualifier. Despite his troubles throughout the night, Larry Wight earned the KSE Hard Charger award, racing from 24th to 9th in the main event, an improvement of 15 spots.

For Sheppard, the win was another step in the right direction towards climbing up the points ladder. Entering Wednesday’s event, he was 115 points back of Decker.

“All we can do is keep trying to win these races and let the rest take care of itself,” Sheppard said in Victory Lane.

Sheppard will get the chance to try for his fifth straight win when the Super DIRTcar Series returns to action on Thursday, August 24 at Ohsweken Speedway for the Triple Crown Showdown.

The event also features 360 Sprint Cars and Crate Late Models with a $25,000 bonus to a driver who can win all three features or a $5,000 bonus if a driver can win the Feature in two divisions. Super DIRTcar Series driver Stewart Friesen will be one driver contending for all three victories. For additional event information, visit www.ohswekenspeedway.com.