After finishing 13th in Friday’s time trials before rain put a stop to qualifiers, and finishing second in his heat, Phelps drew the seventh spot in the grid. Hearn, with the pole at the green flag, took the initial lead, and kept it through a caution in lap 1 and restart in lap 5. Mario Clair pursued from second and Phelps was gradually working his way up the ranks. By lap 17, Brett “the Jet” Hearn was lapping cars, and Phelps had made it to second.

Phelps was just slightly better at maneuvering lapped traffic on Mohawk’s slick track Saturday and passed Hearn in lap 32, but Hearn refused to relinquish easily. He followed Phelps through the turns and challenged him when the second caution brought a double-file restart in lap 42, but just two laps later mechanical issues forced him to the pits and he was unable to return to the race.

However, Phelps wasn’t off the hook. Planck, who had been fast advancing from third, found opportunity to try for the lead with Hearn out of the picture.

“I knew I had my hands full. Dale’s an awful good racer, and he’s really good here,” Phelps said. “I thought for sure he was going to drive right away from me there, but we just had a really good restart.”

Through lap 73, Phelps maintained the lead until the race’s fourth caution slowed the pace, a brief shower sprinkling upon the track. When the green flag waved again, Planck took advantage of his outside position and powered to the lead in the backstretch.

However, a subsequent caution in lap 74 brought the field back together and brought a dose of reality to Phelps, who until then had led 40 laps. Planck hoped to repeat his success and took the outside, but Phelps powered through the inside and back to the top spot.

“Fortunately, we were able to speed back out in front of him. The rain threw a curve-ball in that we weren’t prepared for either, so it’s just one of those races where anything can happen,” Phelps said. “I knew we had to have a really good restart on the next one when he was leading and we were fortunate enough to be able to squeak back out in front.”

Phelps kept the lead through the checkered flag despite Planck’s advances. “The Natural” Planck walked away with a second-place finish. 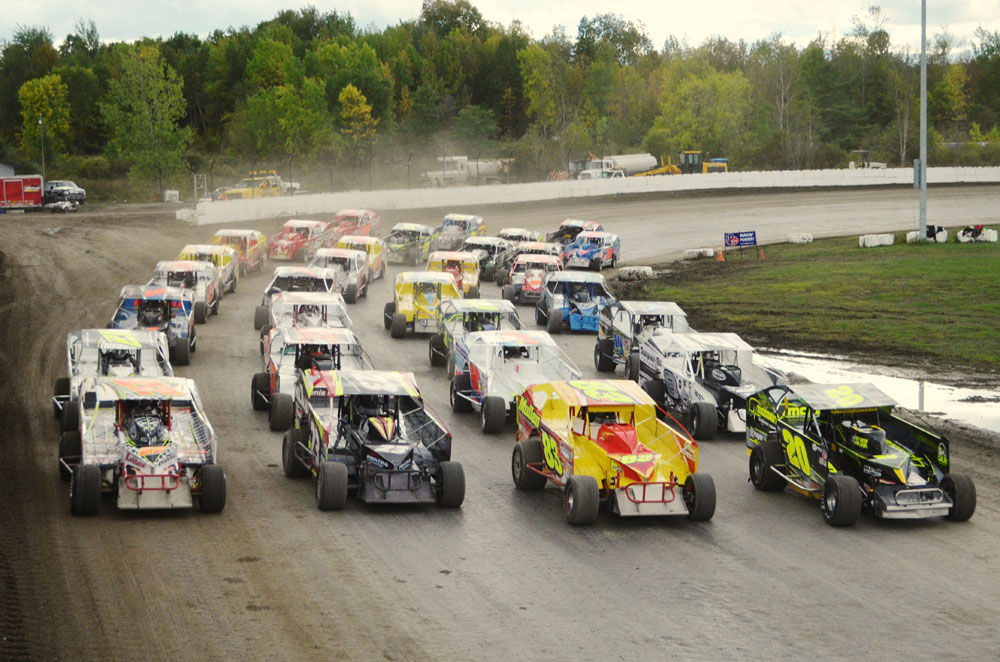 “It’s a little nerve-wracking up there. It’s really close to that concrete wall. It’s nice to run around the bottom, but you’ve got to run where he’s not,” Planck said of the outside lane at Mohawk. “We tried, and came up a little short, but I’m definitely happy to come up second.”

Both drivers emerged from their cars looking forward to future races. Planck, the point leader in the DIRTcar 358-Modified Series, said he hoped his strong finish would translate to another in the night’s upcoming small block feature.

“It gives me a lot of laps for the race coming up,” Planck said. “Hopefully we can take what we learned here and transfer it into a feature win.”

“Hopefully it’s a buildup of momentum going into Syracuse. We’ll see what happens. We’re just happy to finally be able to come away with one.” Phelps said.

After finishing second in his heat and drawing the tenth spot, Justin Haers made it to third at the finish line. Carey Terrance started 14th and broke the top five in lap 42 to finish fourth. Steve Bernard spent the last half of the 100-lapper battling Terrance for fourth but settled for fifth. Rounding out the top ten are Pat O’Brien in tenth, Mohawk 358-Modified track champion Billy Dunn in seventh, Danny O’Brien in eighth, Rob Bellinger in ninth, and Laurent Ladouceur in tenth.

The Super DIRTcar Big-Block Modified Series heads to Syracuse for its next appearance, where time trials and qualifying events make up part of NAPA Auto Parts Super DIRT Week XLI, leading up to Sunday’s VP Small Engine Fuels 200 at the “Moody Mile” on the New York State Fairgrounds.