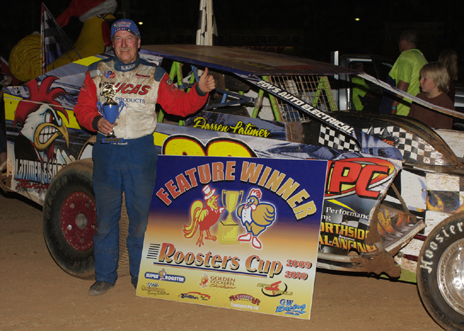 Finding unexpected success in his only appearance in the land downunder, Canadian star Pete Bicknell raced home in the Darren Latimer-owned #83 entry on Saturday to win the opening round of the Roosters Cup at Maryborough Speedway.

After making heavy contact with the wall in his opening heat race, Bicknell advanced from the 13th starting position on his way to victory, holding out Australian Champ Peter Britten and Mark Robinson.

“After the heat (crash) I figured I just better be careful and take my time,” offered Bicknell, DIRTcar Racing Northeast’s all-time Small-Block Modified winner (203), in his post-race response. “I could see where everybody was making their mistakes and I knew where my car was better. I could drive in so good underneath them and they were slipping up high so I just conserved and tried to keep on doing that.”

The 30-lap race got off to an untidy start with Luke Oldfield a lap one casualty after heavy contact on the backstretch. Pole-sitter Barry Ashen led the field away only to be rounded up by Mark Robinson, who moved from third to first on the opening lap.

Robinson held the race lead for all but the remaining four laps, paying dearly for moving off the pole-line as he worked his way through dense lapped traffic as both Bicknell and Peter Britten moved to within striking distance.

The slick Maryborough surface offered little in the way of passing opportunities, with Bicknell showing his class by methodically picking off cars one at a time, yet still protecting his prime position low on the racetrack.

“I knew as long as I didn’t leave that bottom open there was no way he (Britten) could get by me. I made sure I slowed down in the corner and I know Peter’s a good racer, he’s not going to knock me out of the way so I knew I would be ok.”

Britten advanced underneath Robinson with three to go and appeared to be gaining on Bicknell only for the yellow flags to wave, setting up a two-lap dash to the finish. It mattered little however, with Bicknell going on to score what was an unlikely win after the damage sustained earlier in the night.

“The best of the best were here, there is no doubt about it,” Bicknell remarked. “Peter Britten and a few of the other guys, I knew they would be good, just didn’t know how good. Then when we were starting out with the warm-ups they had me worried because I was a little bit slower than they were but we had some fuel issues there. I knew I could be a little faster than that so it was just a matter of getting the car dialled in.”

“The track was a lot like we race on. It gets a little dusty and abrasive, but that’s kind of fun because that’s where the driver comes out. When the track is wet and tacky anybody can go fast on it. That was more of a drivers track tonight.”

The St. Catharines, Ont. chauffeur was accompanied on his whirlwind Australian visit by Bicknell Racing Products VP Randy Williamson, with the pair earlier holding a ‘Dirt Modified University’ seminar at the premises of the Australian BRP distributor Ian Boettcher Race Parts. They also conducted a driving school the day after the Maryborough race, capping off a hectic five days in Australia.

“Hopefully, we can get the drivers to understand the cars a little better and help dial in everybody a little quicker and give them some ideas to look at. Identify what they are doing wrong maybe and what they should be doing when the track changes like it did tonight.”

“Its been a lot of fun. Maybe next time we’ll try and get a few of us over. It’s a great country, great people and beautiful racetracks. When it really comes down to it, these facilities are great. They are as good or better than most of the tracks that we race at,” Bicknell added.

Bicknell and Williamson depart Australia on Monday (Dec. 21) to prepare for what will be a busy 2010 racing season back home on the other side of the globe.