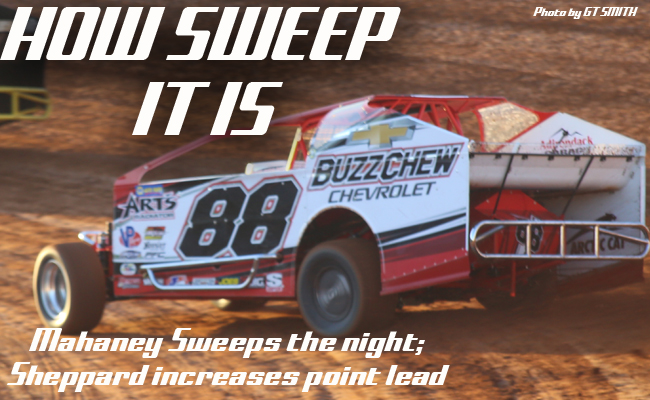 CONCORD, NC — Nov. 2, 2017 — In front of a packed grandstands, the Super DIRTcar Series took to The Dirt Track at Charlotte Motor Speedway for Night One of Textron Off Road World of Outlaws World Finals for their qualifying night. Mike Mahaney had a night to remember, sweeping both qualifying sessions and picking up two heat race victories.

In all there were 48 Big-Block Modifieds that signed in at Textron Off Road World Finals. The Super DIRTcar Series first took to the track for hot laps followed by qualifying to determine the heat race line ups for Friday’s portion of the program. Mike Mahaney out of Kings Ferry, NY timed in quickest with a lap of 15.609-seconds; Mahaney would get the best view in the house for the first heat race.

A little Deja-vu with Mahaney coming out of the third qualifying group knocked Matt Sheppard off the perch of the quickest qualifier and stole five valuable points away from the championship points leader and swept qualifying for the evening.

Starting from the pole in the first heat for Friday’s portion of the show, Mahaney jumped out to an early lead and would continue the streak by picking up the heat race win for Friday’s Nights portion. Joining Mahaney in the Friday heat race winner category was Mat Williamson; Matt Sheppard; Keith Flach and Demetrios Drellos.

“It couldn’t be any better that’s for sure,” said Mike Mahaney. “We’ve come down here [in the past] and kind of struggled. We gain a lot of fans the one time we came down here and passed everyone in the Last Chance Showdown and everyone got excited. But to come down and feel like we came out of the box with a really good car. We timed first in both sessions and won the heat races; that will set us up great for the weekend. Couldn’t be prouder of our Buzz Chew Racing Team. We’ve just been doing everything perfect.”

Both Jimmy Phelps in the 98H and Brett Hearn both suffered setbacks and were forced to go to backup-cars.

The championship battle in the Super DIRTcar Series which is far from over saw Sheppard come into night one of Textron Off Road World of Outlaws World Finals, Matt Sheppard holding a slim 30-point lead over his closest competitor, Billy Decker. Matt Sheppard from Waterloo, NY put on a driving clinic in his Friday heat and Saturday heat races and picked up five points for each of his wins. Second in points Billy Decker brought his No. 91 home in second for both Friday Night and Saturday Night heat race, earning four points for each race. Throughout the night Matt Sheppard was able to pick up two points on Decker, widening the separation in the championship battle to 32 points

“We’re just down here to trying to win,” said Matt Sheppard. “Last year we got a little taste of not having point pressure and we just let it all hang out and we were good all weekend. That was a lot more fun so we’re not going to go out there and run the crap out of it and see if we can win some races.”

Decker who didn’t seem as confident in his No. 91 wasn’t going to go down without a fight.

“We want to run good; that’s the bottom line for us,” said Billy Decker. “Yeah we’re points racing but we’re also trying to put ourselves into position to win and I don’t think we’ve done that yet but we’re digging and clawing. We’re off a little bit this year and not as sound as we need to be – I don’t know why; it’s got me confused but we aren’t quitting.”

The five heat race winners from Friday and Saturday’s portion will re-draw for their starting positions while the rest of the field will start from sixth on back. The stars of the Big-Block Modifieds will run their 40-lap Feature.

“I don’t normally draw that well but maybe I’ll have to pick a kid to draw for me,” said Mike Mahaney. “It’s only a five-car draw so it’s not that bad with a 10-12 car draw and you can really set yourself back with that.”