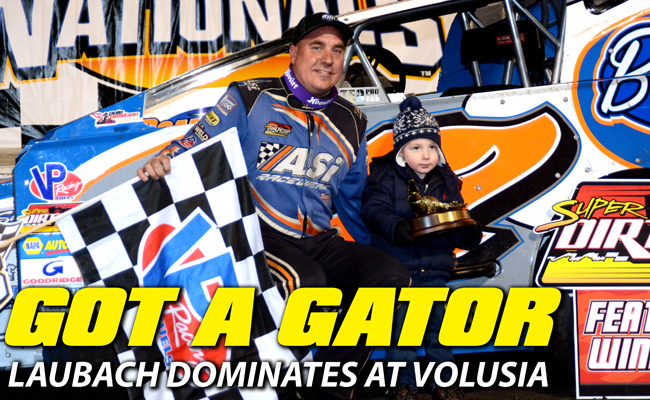 Pennsylvanian Laubach Holds Off New Yorkers to Win at Volusia

Friesen, Wight and Sheppard give chase, sets up showdown for ‘Big Gator’

BARBERVILLE, Fla. — Feb. 20, 2015 — Rick Laubach earned his first and only Gator trophy from the DIRTcar Nationals two years ago on Friday night. The Quakertown, Pa., driver held off the stars of the Super DIRTcar Series that evening to claim his one and only Volusia Speedway Park victory. Two years to the day later, Laubach repeated the feat.

“This feels good obviously,” he said. “It didn’t hurt that we started on the pole on a night like tonight. It’s not easy to win down here with them guys all right there. I started second last night and fell back so far I can’t even count that high.”

Laubach managed to keep 2014 DIRTcar Nationals champion Stewart Friesen in check en route to winning the 30-lap Modified feature Friday night. He pulled away from Friesen in the final five laps to claim the winner’s prize in front of several friends and family members.

“My family is from Florida,” said the former New Egypt and Bridgeport Speedway champion. “We come down here to race and they come up from Ft. Lauderdale and we always tease them about gators and stuff. There is one sitting at my mom’s house and my son always looks at it during the day when he goes there so now he can put one next to it.”

Laubach started on the pole alongside Canadian standout Mat Williamson. At the green he quickly established himself as the race leader as he drove through the middle of turns one and two and then to the top-side to take the lead. Larry Wight and Billy Pauch gave chase as they battled for the runner-up position.

Then on lap two fireworks erupted between Pauch and Wight. They both dove to the bottom of turns one and two when contact was made that caused Pauch to spin, bringing out a caution. During the yellow, Pauch showed his displeasure with Wight by driving into him several times. Both drivers were sent to the rear of the field handing the second position to Matt Sheppard.

Action resumed with Laubach restarting from the inside lane and Sheppard next to him on the front row. Laubach outran Sheppard down the frontstretch to maintain the lead as they raced through the first two corners. Sheppard had his hands full with the ninth starter Friesen. Their battle allowed Laubach to run the cushion and stretch his advantage as Sheppard and Friesen swapped lanes in the race for second.

Laubach pulled away from the pair as the race reached the lap-10 mark. Friesen continued to work over Sheppard for the second spot and ultimately had the pass made on lap 14. Unfortunately a caution for a spin by Erick Rudolph negated the pass putting him back to the third position. The caution was proved pivotal for Laubach as he made adjustments to his Frank Boardwick-owned machine.

“The yellow on lap 13 meant everything,” Laubach said. “That yellow really helped me, I made some adjustments and from there it was good for a couple laps which allowed me to stretch it out.”

Only 10 laps remained when Laubach again found himself battling in traffic. As he attempted to navigate through the slower cars Friesen got by Sheppard and began to reel him in. Laubach saw the five to go sign as Friesen worked to his back bumper. Laubach upped the tempo, allowing him to open the advantage on Friesen.

At the checkered it was Laubach solidly out in front over Friesen, who did all he could to challenge for the victory in his Tom and Roxanne Cullen-owned car. The finish was good enough for him to take the points lead for the event going into the final night of competition for the DIRTcar Nationals.

“That is one of the coolest trophies in modified racing,” said Friesen about the Gator trophy. “We were fortunate to pick it up last year and it could use a girlfriend so would love to have another one to take home.”

Wight drove like a man possessed to work his way back up through the field to get by Sheppard on the final lap to take third. Wight’s LJL Racing car was hooked up on the cushion allowing him grab the final spot on the podium.

“We have the best car we’ve ever had down here,” Wight said. “This new Teo car is working really well and I think we got the Penske shocks dialed in. Hopefully we’ll have a strong car for tomorrow. It’s a shame what happened, not sure why we got penalized, we didn’t retaliate none, but it is what it is and we came back to get third.”

Sheppard struggled late in the race with a tight racecar, relegating him to the fourth position. Williamson drove his Bicknell car to a fifth-place finish after starting on the outside of the front row of the feature.

Going into the final night of racing, Friesen, Sheppard and Wight are separated by less than 15 points as they each go for the big Gator Trophy on Saturday night.

The DIRTcar Nationals concludes at the Volusia Speedway Park on Saturday with a 50-lap finale for the Super DIRTcar Series Big-Block Modifieds and the World of Outlaw Late Models. Gates open at 5 p.m. with racing getting underway promptly at 7:30 p.m.