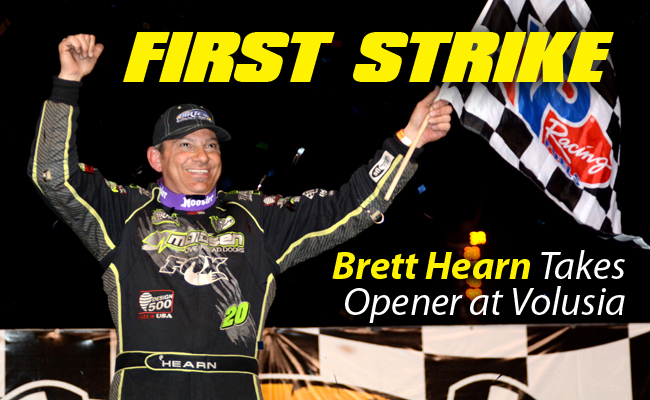 BARBERVILLE, Fla. – Feb. 18, 2015 – For the 19th time in his historic career, Brett Hearn took the checkered flag on Wednesday night at Volusia Speedway Park in the Super DIRTcar Big-Block Modified Series opener during the DIRTcar Nationals.

Hearn swept into the lead late in the 30-lap feature then charged to victory for the 861st time overall in his storied career. Hearn dedicated the victory and the Gator trophy to fellow racer Brian Stevens, who lost his battle with cancer earlier in the day.

“This is a great team to come back from what I thought was a subpar heat race for us to make some great adjustments,” said Hearn, of Sussex, N.J. “We are racing with a little bit of a deep heart. Fellow racer, somewhat of a relative of mine, Brian Stevens passed away this morning and I told him on the way down here; I Facebooked and I told him that if I got a Gator trophy it would be in his honor and here it is right here.”

The non-stop feature got underway with Anthony Perrego and Jamie Mills alongside one another on the front row. Mills got the jump on the youngster as he beat him through turns one and two to secure the early lead. Mills worked the outside lane while Perrego worked around the racing surface trying to close the gap.

Hearn began marching to the front early with his Teo Pro Car from his seventh starting spot. The Sussex, N.J., driver ran the bottom over the course of the first portion of the feature as he tried to close in on a top three that included Mills at the point with Perrego and Billy Pauch in pursuit. He tracked them down quickly and began exchange the third spot with Pauch by the fifth circuit.

Mills continued to set a torrid pace out in front. The Delaware native opened up a half-straightaway lead on Perrego by the time the event reached the tenth circuit. Perrego was unable to stay with Mills as he continued to power his way around the outside of the “World’s Fastest Half-Mile.”

The complexion of the race changed on lap 14. Mills caught the end of the field forcing him to alter his groove. With Mills rhythm broken, Perrego began to close the gap while Hearn challenged Pauch for third once again. Mills’ wasn’t nearly as good when he was forced to move around the speedway allowing Perrego, Pauch and Hearn to close up on him.

Perrego blasted around Mills in traffic on the outside of turns three and four in order to take the lead. Once he got the top spot Perrego opened the gap on Mills as he now was forced to not only contend with slower traffic, but also Pauch and Hearn closing in on him. Perrego kept the top spot with 10 laps to go, but it didn’t last long.

Hearn took over the third on lap 21 from Pauch and then he grabbed the runner-up spot one lap later. From there he focused his attention on Perrego as he raced through heavy traffic and found some traction around the bottom of the surface that allowed him to rapidly make up the distance on Perrego.

“You never know how these races are going to play out,” Hearn said. “The track was good from the get go. Why one car gets better as the race goes on and why one car slips away. Sometimes you just don’t do. If you could do that all the time you’d never lose. Tonight we had a car that stayed underneath me and got better as the race went on where all the guys seemed like they backed up a little bit. The track was unbelievable good, you could drive anywhere you wanted to. It was a driver’s race track. I’m just glad to be here.”

Once he got to the point Hearn never looked back. He drove away from Montgomery, N.Y., driver Perrego and captured the victory by nearly four seconds over Perrego who had to settle for second. Perrego, also driving a Teo Pro car, was happy to score another top five at Volusia but disappointed with the slower car that impeded his progress late in the race.

Mills brought his Bicknell across the line in the third spot after leading much of the early portions of the race. He admitted afterwards that the team made the wrong decisions when setting up the car causing him to fade in the races final stages.

“We missed the track a little bit,” said Mills. “We thought there would be a little more cushion up there around the top. It went away on us then the left rear gave up on us at the end. We’ll take a third rolling with these guys. They are the best in the business. We’ll take it, go home and work tonight and try to get better.”

Larry Wight, of Phoenix, N.Y., started 14th and drove his way up to the fourth position passing Pauch in the final laps to secure the spot. Pauch faded back to complete the top five after starting third.

Gates open at 5 p.m. and racing begins at 7:30 p.m. on Thursday evening as the World of Outlaw Late Models join the Super DIRTcar Series Big-Block Modifieds.