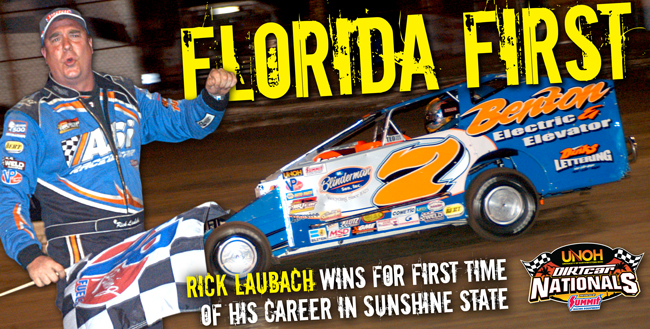 For Nine Years, Rick Laubach Traveled from Pennsylvania to Florida, Hoping to Score a Victory His Whole Family Could Watch

BARBERVILLE, FLA – February 23, 2013 – When Rick Laubach pulled his Enders-powered No. 7 TEO chassis out of victory lane yesterday, a crowd of a couple dozen people followed him. His extended family gathered around his pit stall after the race to help him celebrate his first-ever win in the state.

“My family lives down in Fort Lauderdale,” said Lauter, of Quakertown, Penn. “When I come here it’s like a little bit of a reunion. I get to see my niece, my sister, and everybody. My parents come down and it’s fun.”

They were all there to watch him beat Big Block Modified legend Danny Johnson to the finish line Friday, Feb. 22, for the third of four Super DIRTcar Series feature events during UNOH DIRTcar Nationals presented by Summit Racing Equipment at Volusia Speedway Park.

“It really feels awesome. I knew we felt good tonight coming here and it couldn’t get any better,” said Laubach, who has competed in UNOH DIRTcar Nationals presented by Summit Racing Equipment for nine years. “It means a little more to us, I guess.”

Laubach’s success started early Friday, clocking the fastest lap in timed hot laps at 17.610 seconds. He won his heat and a lucky redraw let him pick the outside pole starting position. He took the lead at the green, and kept it through 30 laps and four cautions.

Although he never relinquished his top spot, the race was a nail-biter for Laubach. Danny Johnson, who started on the inside pole, kept his 27J bumper-to-bumper with Laubach through every turn, determined to pull off his second Volusia win of 2013. Unfortunately for “the Doctor,” Laubach was strong on restarts, taking the outside every time, and unflinching during green laps.

“He’s fast, and he’s already got a win as well, so he’s comfortable,” Laubach said of Johnson. “We’ve never won down here before – been close once – and I could feel him there.”

“I would move down a little on the starts to take away any kind of slide job from him, and then I would just get comfortable back on the outside and go,” Laubach said.

Finishing third Friday was Pete Britten, whose success at UNOH DIRTcar Nationals presented by Summit Racing Equipment, includes another third-place finish and a fourth. Britten drove from 13th on the starting grid to third at the checkered.

“It gives me confidence that I know the car is really fast in the feature. It’s also frustrating that I’m not time trialing as well as I normally do. Normally time trials are such a strong part of my race night. I’m always putting myself out front, but tonight, and the past couple of nights, I haven’t been doing as well,” Britten said. “I seem to be getting better and better in the feature races and worse and worse in time trials and heat races, but I guess it’s the feature race that counts.”

“Hopefully we’ll come down tomorrow night, do well in the time trial, start near the front of the field, and not make it so hard on ourselves,” Britten said of Saturday’s Super DIRTcar Series race that concludes UNOH DIRTcar Nationals presented by Summit Racing Equipment.